LAST NIGHT OF THE YEAR

If anyone is still out there,

I know I've been, absent. Neglectful.  Years lost, away from these woods, instead of lost in them. These posts were so daunting to undertake that I eventually slowed to a halt. What can I say, they took a lot out of me. Lots of separating single hairs with tweezers. I have a million more items and records to add for the posterity of all mankind. And by mankind I mean random people out there in the universe looking for some sprawling resource for Phil-related info and cataloging. I still feel strongly about this. I started doing this originally because no one else was. I set out to create the thing I was wishing was out there for me to find.

I guess I got overwhelmed because there's SO much out there, things I have and things I don't and in both cases I have so little actual information about any of it. It's a bit of a rabbit hole. I started to feel weighed down and a little silly. It's a lot of work and, in a life full of life and many other overwhelming and gigantic creative projects already, it can be too much for me to actively handle.

That being said, I'm still out here and if anyone cares I still consider this to be a live archive. It's New Year's Eve, or anyway, it's just begun to be and I happened to notice the last entry I did was for the New Year's Resolution comp. A random coincidence I guess, but I'm going to take it as a little nudge from the universe to stop being lazy.

What led me to glancing at the page tonight was actually a random and astonishing discovery. Through totally out of the blue circumstances I happened to notice that Phil has a link to this, my humble mess, on the actual PW Elverum & Sun website. 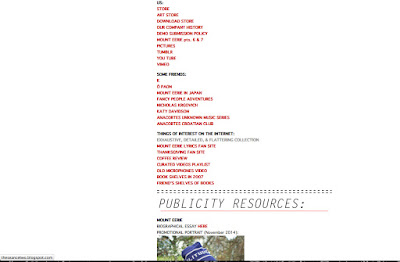 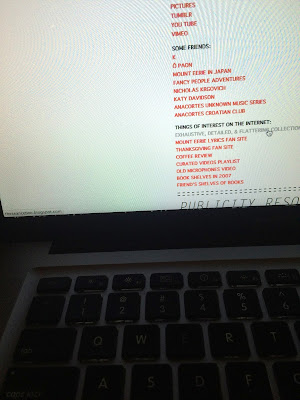 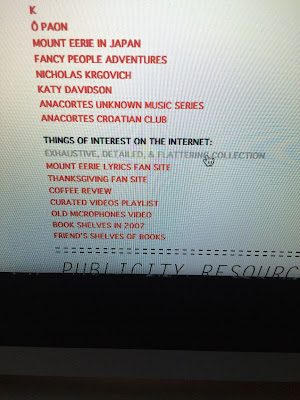 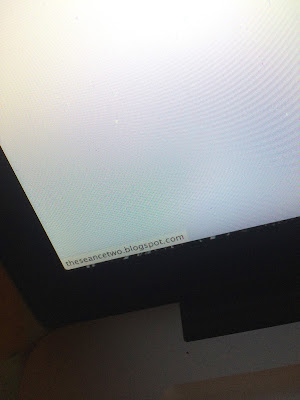 It blew my mind a little bit, I'm not gonna lie. It also made me feel incredibly flattered and inspired. Just saying, it's a big deal to get a little nod from the man himself. It means a lot to me. This site isn't an attempt at a fan page and it certainly isn't meant to be cloying and pedantic. I just respect the man's work and art and was searching for a place I could learn more about it, get more lost in it. So this has all been my attempt at making that, for myself and for the rest of the world, the annals of history. In a perfect world I would love to see it flourish and reach some sort of very accurately sourced and annotated state someday but I'm not holding my breath. I'll just suffice with doing the best I can with what I have.

Speaking of having your mind blown, I've noticed over the last couple years, people actually using my pictures, I'm saying my pics that I've taken with my camera, of various Phil records, for use out there, as in, say, I've seen people selling Phil records on ebay and using my pics for their auction image. There have a been a couple other circumstances like that too and I wish I could recall what they were. I can't recall what label or site it was but there's some other legit thing out there using my images for their representation of something on a website. And I'm saying that in the spirit of flattery and surprise. I'm glad that I was able to provide a little something to some folks out there that needed it.

Speaking of neglect, I've received a bunch of very nice, very encouraging emails from people all over the place including some actual first-hand participants in these records. I've really dropped the ball in providing responses and I'm sorry, esp. considering that emails like that are exactly what I was hoping for and in need of to make this a more thorough and useful place. I'm sorry and I hope that if I can manage to wrangle some responses to your kind words or inquiries that you'll all be amenable to talking. It means a lot that you've taken the time to look at what I've done and to reach out in any way at all and I apologize for not at least saying so.

I'm not one for "New Year's Resolutions" and all that, ESP when it comes to "BLOGS". So let's not consider this in that realm. Let's just say I love this project and I'd like to see it living a lot more and it's in my hands to do that. I can't make promises to myself but I can say that I've gotten a lot better, in life, at deciding to do something and then just plugging away at it until I knock it off the list. Moreover, if the X-files and Twin Peaks can manage to return to this mortal coil in 2016, well, here's hoping my little mausoleum can too.

Thank you so much to anyone that's out there still reading this and caring about/supporting my obsessions with all this cataloging minutiae and my general taste for the epic.

And THANK YOU so much, Phil, for the music and all the rest of it, the world is a better and more interesting place for it,

and thank you for your kind description of my efforts.

It made my year.

Posted by POLTERGEIST at 12:35 AM No comments: