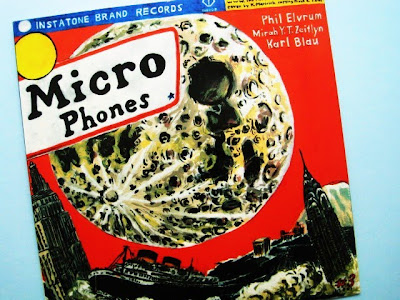 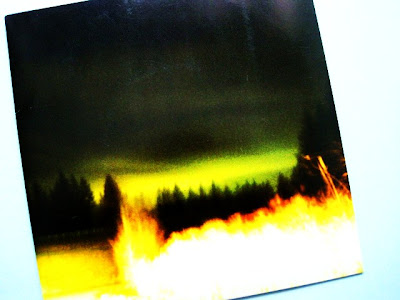 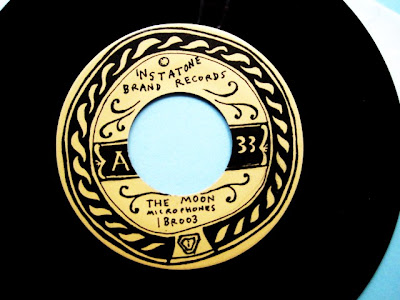 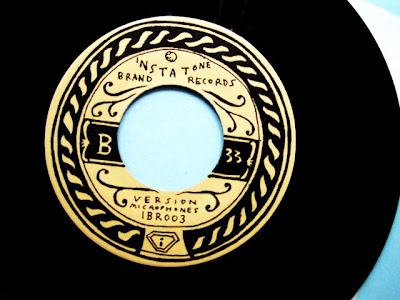 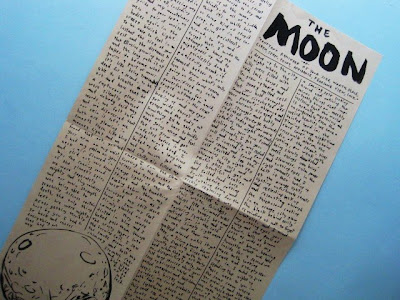 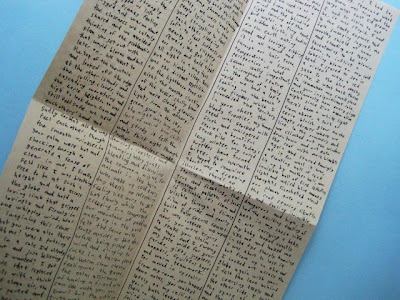 -Strangely little info available on this. No recording info. Not where, not when. Though, based on the timeline and release date we would have to assume it was recorded sometime in 2000.

-As usual I am guessing this was pressed in an edition of maybe 500 based on the size of the label.

-All copies on black vinyl, as far as I know.

-These songs would later be collected (same versions) on the "Song Islands" CD.

-Inner groove info is that combo of obvious label stuff and indecipherable other numbers (IBR-003A and B, and then U-53305 M-A and B)

-Other details of note on this record:

We have, once again, the classic Phil inner label design, fully realized.

The back cover is, again, without info, only a blurry photo, reminiscent of other Microphones releases from around this time (Moon, Moon 7", It Was Hot... LP)

Once again there is an absence of "The" both on the 7" and on the inner label. It is only on the insert that they are referred to as "The Microphones".

This is the first Microphones vinyl to feature and actual insert. The first of many, featuring Phil's hand-written lyrics. Though, curiously, no other info. The insert only has the lyrics and the full name of the song (The Moon or "Constand reminder of your size, worth, place, girth, span, point, avoidance, fearsome view, lack."). A theme we will see many time throughout Phil's career. A song title with many alternate titles or expansions of the original title, added parenthetically, somewhere, usually on a 7" or an insert.

This was a recent arrival in my collection, in fact "my collection" is a recent arrival in and of itself. I have always been a music dork and ravenous in my consumption but have never really codified with "record collectors", I have always felt a fascination for the music and not the product, however, there are a few exceptions, the most notable (as evidenced, in part, by this blog) being Phil Elverum and his lovely records. It seems fitting. Phil, more than most, seems to produce records that are actual physical artifacts, like heirlooms, pieces of important family import, preserved organs, tombs, distilled elements, spells, TALISMANS. And so here we are, with this blog and my own personal collecting obsession turned to actual physical objects, like religious sygils. The point of this rambling being that, "The Moon" as a song is one of my earliest favorites, one of my earliest and most ongoing touchstones with Phil and the people I know that love him, "The Moon" is just one of those songs we all come back to as a epoch making moment in both Phil's career and our own lives. Suffice to say once I finally laid hands to this it was hard to understand how I had lived without it for so long. It was also at one point an idea I kicked around to have the entirety of the lyrics tattooed on my body until it was explained to me that the verbosity of the song would require most of my body to hold it. It seemed completely apropos and impossible.

The versions featured here, an acoustic version of the one on the "Glow Pt.2" LP, which was, at one point, referred to, by someone I knew, as "that totally wussed-out version of The Moon" and a "Version" of the one from "The Glow Pt.2". The concept of "version" may be a little foreign to people who do not follow Studio One or Jamaican dub reggae at all. This is one of the most fascinating aspects of The Microphones and totally makes sense when you consider Phil's background as a drummer and percussionist and producer. He sometimes includes these "versions" on his releases, here, on the reissue of "The Glow Pt.2" etc...

From the Wikipedia page:
Dub music is characterized by a "version" or "double"[15] of an existing song, often instrumental, using B-sides of 45 RPM records and typically emphasizing the drums and bass for a sound popular in local sound systems. The instrumental tracks are typically drenched in sound effects such as echo, reverberation, with instruments and vocals dropping in and out of the mix. Another hallmark of the dub sound is the prominent use of bass guitar. The music sometimes features other noises, such as birds singing, thunder and lightning, water flowing, and producers shouting instructions at the musicians. It can be further augmented by live DJs. The many-layered sounds with varying echoes and volumes are often said to create soundscapes, or sound sculptures, drawing attention to the shape and depth of the space between sounds as well as to the sounds themselves. There is usually a distinctly organic feel to the music, even though the effects are electronically created.

Posted by POLTERGEIST at 12:49 AM No comments: 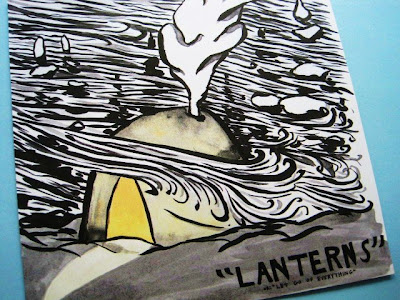 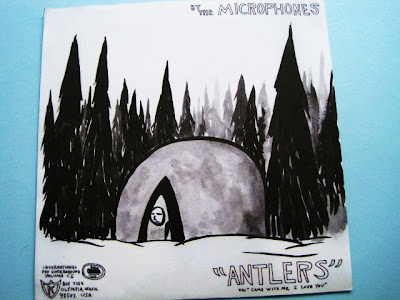 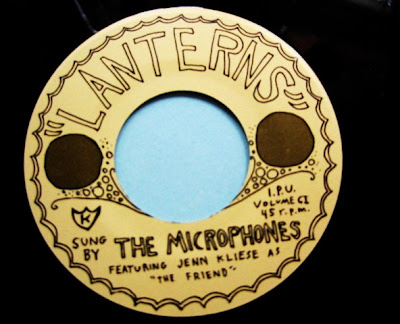 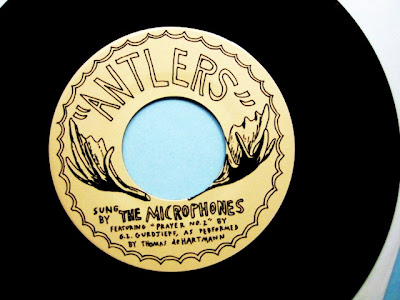 -Another release with very little info available. No info on when or where this was recorded or by whom.

-The cover appears to be drawn and designed by Phil, though no one is credited. These look like Phil's typical drawing/painting style. The front depicts a small hut or igloo in a snowstorm, glowing with light from inside. The B-side features the same hut either before or after this storm. A figure is visible in the doorway.

-Side A Features Jenn Kliese as "The Friend". Side B features "Prayer No.2" By G.I. Gurdzjieff, as performed by Thomas deHartmann.

-As far as I know all o these are on black vinyl.

-These songs would later be collected on the "Song Islands" CD.*

*Though they would be absent from the Japanese import version on 7ep. In there place would be the song "Buzz, Buzz" previously included as one of several bonus tracks on the D+ album "Dandelion Seeds" (more on that in the "Song Islands Post")

-Other details of note on this records:

This is one of the first times on vinyl where the band is actually referred to, throughout, as "The Microphones". On most previous records the cover billed them simply as "Microphones".

The vinyl inner label is the full on Phil style label, hand-drawn in that "old book" color.

These songs are some typical instances where Phil has subtitled the tracks extensively (as on "The Moon", "I Whale" etc...)


One of the first Phil Elverum records I ever bought. I had many brushes with his music (which will be recounted as we go, as the releases go by) in the case of this 7" I think I remember being intrigued by the closed circuit-ness of it, the perfect loop of the song titles. Little did I know, years later, this 7" would be one of the most important experiences of my life. I think, in it's weird way, this could maybe be counted as "one of the records that changed my life" not so much because of the content of the music but because of the spark of inspiration which it catalyzed. Indeed this 7" would become the blueprint for the entire mix project (which I refer to from time to time in these posts) and much of mine and my close friends lives, then and to this day. This was the foundation for the entire epic art undertaking that would follow. This is where it all started. One single lantern held up in the dark, one single light, out there, in the deep woods, for us all to follow off into the wilderness of my mind and his mind and this world, our hearts.

Lanters (or "Let Go Of Everything")

Antlers (or "Come With Me, I Love You)

Posted by POLTERGEIST at 12:33 AM No comments: