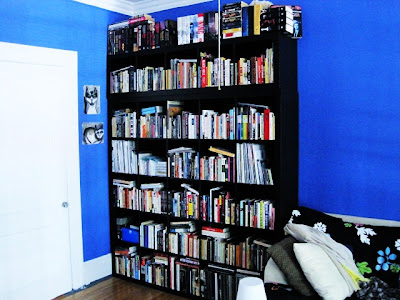 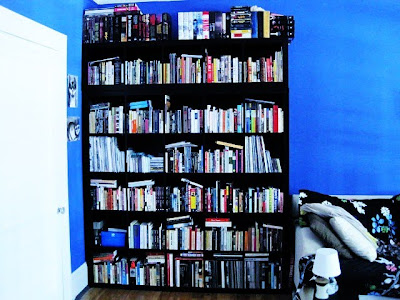 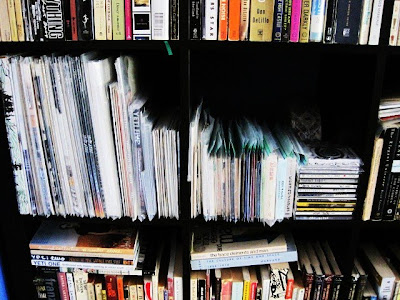 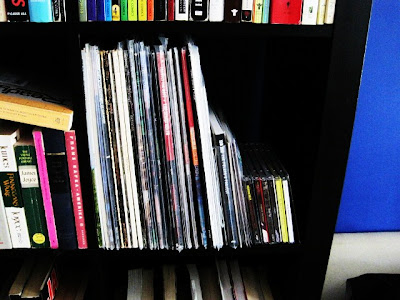 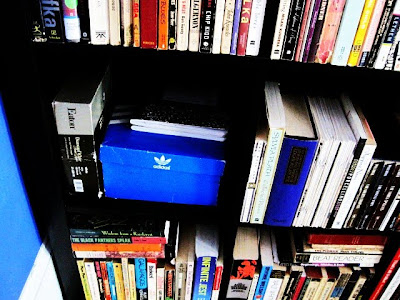 This is my pride and joy, my alter (as I so often have them in my homes, more on this ummm, later in some story about my Porter Square bedroom, probably over on THE SEANCE). I pore over this thing like a child. And when I am feeling swirling and lost I stand in front of it and try to clear my mind and focus. It provides a kind of peace, looking at the spectacle of it and the organization and the solace in knowing that, at least this much of (my) life is in order and organized and listed and can be let go of. I am one of those "list" people. I always find relief in getting things written down and listed in front of me where I can see them and have that kind of power and control over them. A list allows me to release, knowing that the important details are logged and are not going to be lost. Lists allow me to sleep at night.

I have, for much of my life on this earth, been trying to have/achieve a bookcase that allows me this peace. One that chronicles and organizes and displays a set of ideas and colors. And now, thanks to Jennifer and this home that we have, I can finally have that. In the past my books have been consigned to boxes and closets and other homes and inaccessible piles in my rooms, they have been unseen and forgotten details of my life. But now, finally, here with you, they can spread out and be the parts of me and you that they are.

Sometimes I just stand and look at it and feel a deep sense of peace.

When we moved into this apartment the bookcase was one of the first things we agreed that we had to have and though it was such a bitch to actually buy and transport and build this case it was very, very worth it (it was Jenn's idea that we should organize the books not only chronologically but also in order of publishing dates). We actually debated, in the beginning, about getting the smaller version of this case, and I said eh, lets get the big one and we can use the extra space for DVDs and vinyl and what not, and, as it would turn out, it would really,barely, compensate our books, much less anything else.

It later became my opinion that another level could be added to it to expand upon our ideas and what not and so I put it on our registry. We did not get it, but after the wedding we used some of the wedding "gift money" to buy it (along with Jenn's lovely desk for sewing and all of her other projects) and we spent the day constructing and organizing. In this reorganizing, my dream was to create a "Phil" record and etc. section and a "Brian's writing" section. And it happened. The bookcase now features all our books, etc, as well as the Phil Elverum Section and a corresponding Xiu Xiu etc. section as well as a "Brian's writing" section, and, of course, pretty much all of our books.

And that is the story of our bookcase. We are booky people. It is a source of peace and solace for me. I look at it and I see so much of what is important to me in this life (as far as material possessions go). I look at the records and the books and feel a little more OK about everything.

(The top of the shelf is still the Stephen King section and you can also note some of Jenn's lovely charcoals of her, sadly, lost to others, cats.)

Our bookcase is the heart of our home, as it ought to be.


xo
Posted by POLTERGEIST at 2:39 AM No comments: 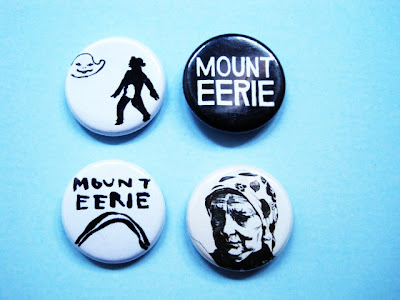 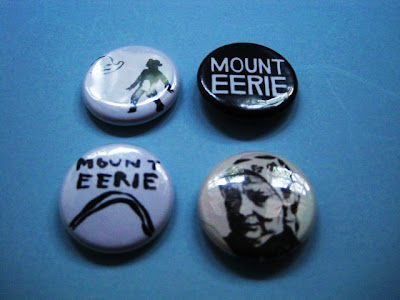 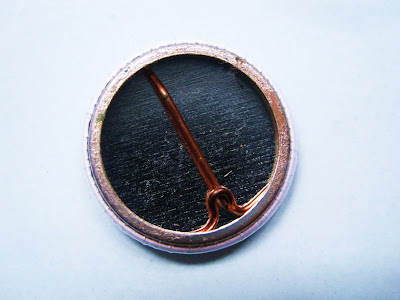 
This was something I picked up early in my ebay career (earlier this year, I am a perpetual latecomer). I have no idea where these came from or who made them but I don't at all think they are an "official" release. They just showed up one day on the ebay auction and there were several sets available and (as we all kind of know) I am a fan of having twos of certain things, like pins and I am not sure I recall why I didn't order two of these sets. The next thing I knew they were gone and I just had to thank my lucky stars that I got one at all.

One is clearly based on the logo from the Microphones "Mount Eerie" LP, one features a detail from the LP version of that release (the face), one has the cover of the "Song Islands" CD and one has the logo which, apparently, was featured on some of the "Two New Songs By Mount Eerie" 12", the first release on Phil's PW Elverum and Sun label.

I am guessing that Phil did not have a hand in making these as they were available for a time (multiple sets) on ebay from some random person. Moreover they do not have any copywrite info around the edges, as pins tend to have.

They are your average 1" pins with removable pinback (as seen in the picture above).

I wear the "Mount Eerie" LP logo one on my major summertime cut-offs and am often in fear of losing it (as I have a long history of losing a lot of my favorite pins off of my clothing). I think I placed it there, below the right front pocket, not too long before I took my trip to Boston this summer. As seen here: 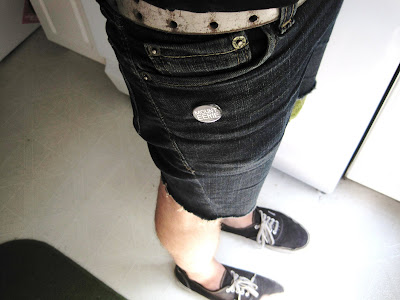 Not much more to say about these, though I wish there was. I wish I knew who made them, where they came from and how many were produced so I could report the info here for posterity. But, as I am sure I will have to get used to, this information will often, about many of the various items we discuss herein, be lost forever to the tides of history.
I cherish them, regardless.
Thank you, whoever.


xo
Posted by POLTERGEIST at 2:20 AM No comments:

Labels: me in the kitchen with the button, two views of the same four pins 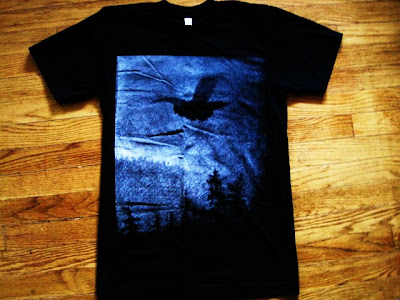 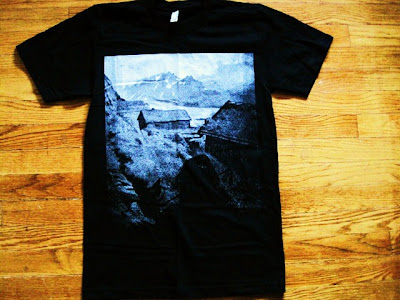 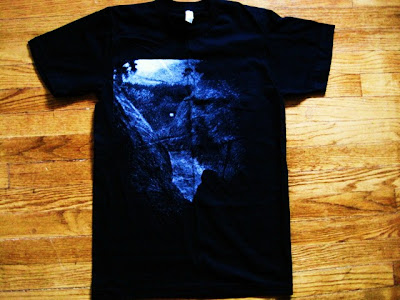 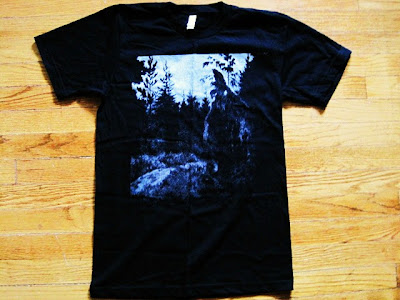 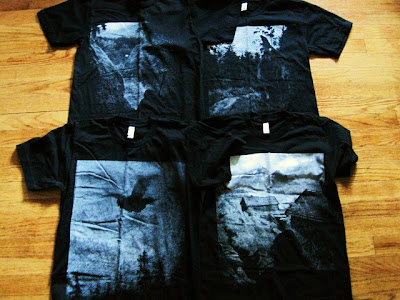 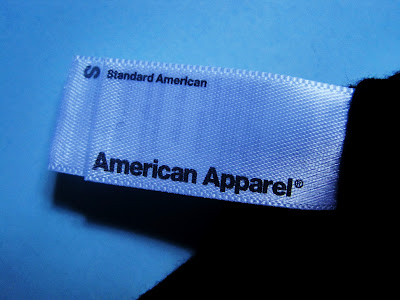 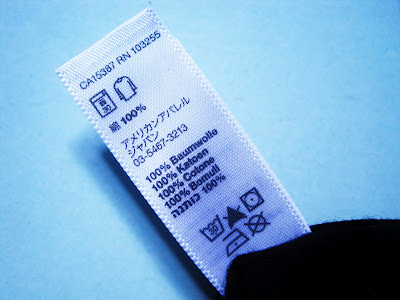 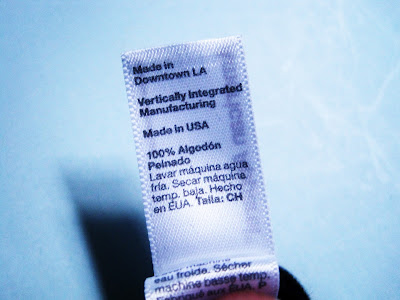 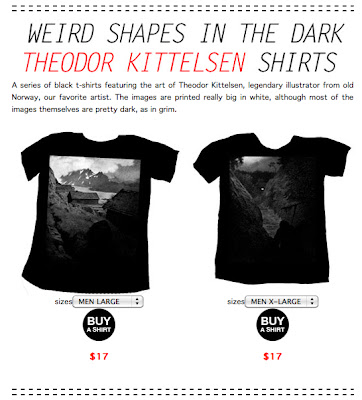 ("hoestkveld", "pestaleaves", "pestaarrives", "stumpshape" and all four together on my living room floor, t-shirt tag info, a screencap from the PW Elverum site)

-Number produced: no idea. Maybe I could ask Phil, but I'm also sort of guessing that these are being made to order to a certain extent since, shortly after they went on sale, most of the small and medium sizes were briefly unavailable and then returned.

To accompany today's post about July, July and all that...

Not sure if any, besides, the most supremely dorky among us was aware of this wonderfulness or that it had actually finally come about (some of us might kinda just check the PW Elverum and Sun site kinda like everyday...). And yes, ok, I got all four that there were, is that so wrong? They just looked so haunting and mysterious. And, I mean, let's not shit ourselves, what was I not gonna get all of them?

They arrived super fast. I was excited about them, but when they got here I got more excited. There was just something so perfect, so apropos of the "Wind's Poem" album about them, something so perfectly black metal. I mean, come on, it's four all black t-shirts with really inscrutable prints on them in black and white. No words, no explanation, can't even really tell what I'm looking at. Strange pastoral scenes of some kind, rendered haunting and dark. The images remind me a little of the beautiful background art in the Cerebus comics.

A series of black t-shirts featuring the art of Theodor Kittelsen, legendary illustrator from old Norway, our favorite artist.
These are not “Mount Eerie” shirts but you are welcome to think of them that way.
These are just shirts we wanted to wear ourselves and since we had to make a screen and everything, and since they turned out so great, we thought we’d offer them to everyone.
For now there are 4 designs. They are “American Apparel” brand, which means they’re made in the USA. They’re good quality shirts. No frills. Solid stitching. 100% cotton. Well made.
The images are printed really big in white, although most of the images themselves are pretty dark, as in grim.

They apparently have names: 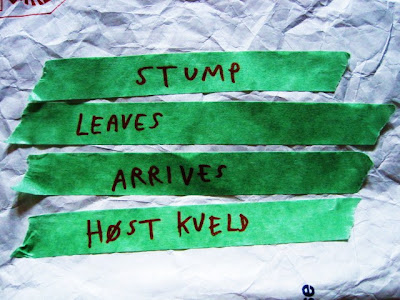 though, having removed these from the shirts I know forget which was which. (Actually figured out a way to differentiate them finally, see above...)

Hoping for more in this series. Loving the new set up over at PW, now featuring a "Shirt Store" button. And, of course, one of the highlights of ordering directly from Phil is getting the package with your name written in Phil's handwriting. It's like getting an autograph or something. 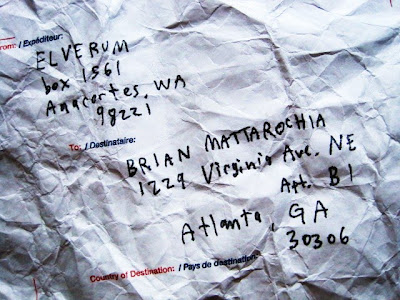 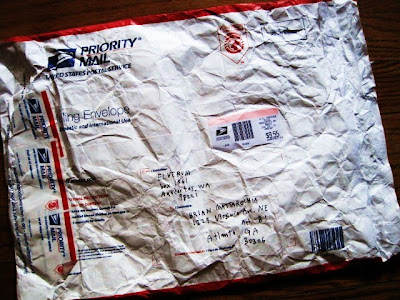 and getting a post-mark from Anacortes always feels like receiving a transmission from Neverland or something, 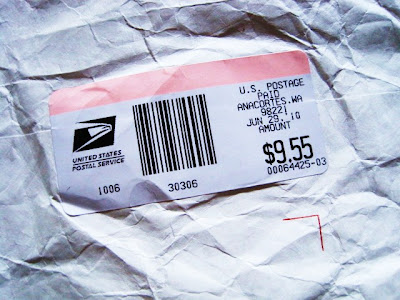